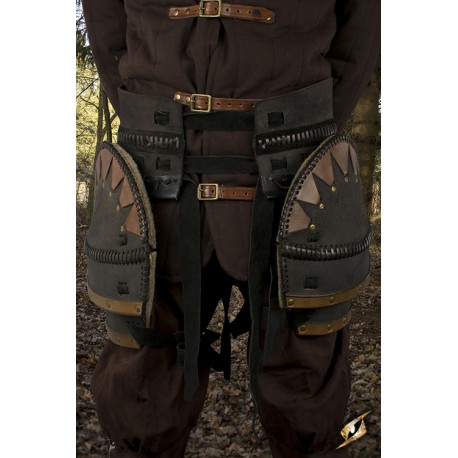 War is all that you know. For your clan, war is a permanent state of being. Just as you need meat to sustain you and leather armour to protect your leathery green skin, war keeps your thirst for chaos and violence sated.

Your clan now gathers to prepare for the war against the goblins. The creatures used to be your allies, but in the last battle they became cowardly and ran. Now there is nothing more to be done than to hunt down every one of them and serve them over your fire.

You begin by putting on your Orc Brute Belt with Tassets.

Epic Armoury’s Orc Brute Belt with Tassets is a sturdy and practical piece of armour designed to protect the lower abdomen and hips during combat. Made from chrome-tanned leather plates strapped together using tough leather, this belt has great structural strength to make it last a long time and resist deformation. Additionally, felt padding reinforces the armour against the skin to absorb blows. Tribal decorations enhance the look, featuring leather laced edges and brown accents riveted to the armour.

Secure this belt to your waist by tying the split-leather straps through brass rings in the front. The style is orcish and natural, and is fully compatible with other Epic Armoury leather and metal armours, giving you the freedom to customize your costume.

Available in Black and Brown, and in One Size.