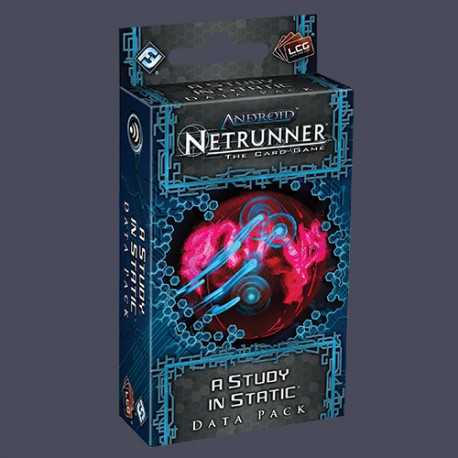 “How do you visualize static? I see thieves prowling the net in slow-motion, their hacks disrupted, crawling down the paths we set before them. The greatest securities don’t stop these criminals and their progress but route them where we choose.”
–H.O. Murakami, Jinteki network designs

Time is relative. Time can be manipulated.

As part of the Genesis Cycle, A Study in Static focuses on developing each faction’s traditional strengths even as it opens up new strategies for players to explore.

With their advancements in ice, icebreakers, and hardware, the Data Pack’s sixty new cards (three copies each of twenty individual cards) escalate the game’s cyberstruggles to a new form of art.

No longer do the factions content themselves to building and breaking snares and subroutines; they turn their attentions to the flow of time itself. So much as time is a matter of perception and of movement, A Study in Static is a study in the ability to accelerate and impede the passage of time.

This is not a stand-alone deck. An Android: Netrunner The Card Game core set is required to play.